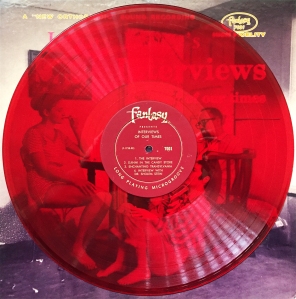 To be completely honest, I’m not exactly sure where, or by what means I acquired Lenny Bruce’s first two records. Ebay maybe? This would have been quite some time ago, but it’s been a while since I spun either of them. Relatively tame, all Lenny Bruce-things considered, I’d still suggest both of these Fantasy Records releases to those of you into history and comedy, and generally anything good. To my knowledge, there are both red and black vinyl versions of both, so, you know, pick your poison. 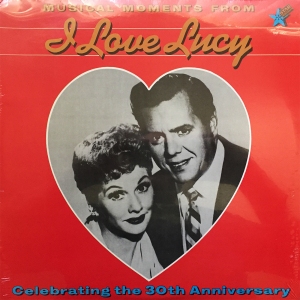 Happy early birthday, Lucille Ball! Our favorite (and closest) brick & mortar is giving out free I Love Lucy records (today and tomorrow) in honor of the late, great Lucille Ball’s celebrated birth (purchase necessary). Born 107 years ago tomorrow, Lucille’s history in television comedy has not been forgotten, and with a bit of luck, it never will. Happy birthday, Lucy! 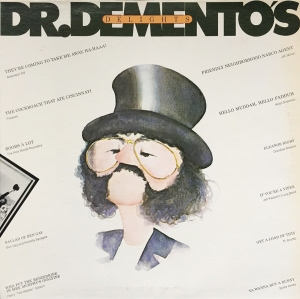 It’s hard not to get into the delightful goofiness of Dr. Demento’s 1975 comp, Dr. Demento’s Delights. Though missing the insta-classic Fish Heads (by Barnes & Barnes, 1980), this 12-track soundtrack to extreme lunacy features a few essentials in They’re Coming to Take Me Away, Ha-Haaa! (Napoleon XIV), Friendly Neighborhood Narco Agent (Jef Jaisun), and Hello Muddah, Hello Fadduh (Allan Sherman). It’s pretty solid smirk-music, and perfect for a day like this. 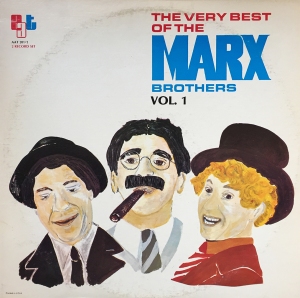 Go ahead. Have a laugh. It’s Friday! Enjoy some Richard Pryor, some Steve Martin, some Rowan & Martin’s Laugh-In, or even some Marx Brothers (featured here). In fact, listen to whatever makes you laugh out loud, be it the latest Kid Rock album, or maybe some goofy They Might Be Giants (The Prudent Groove does not actually suggest you listen to Kid Rock). Happy Friday, and don’t forget to laugh! 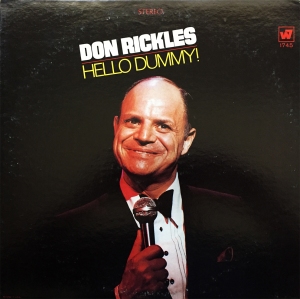 Don Rickles’ debut comedy album was released in 1968 on Warner Bros. Records and was recorded live at the Sahara Hotel in Vegas. Only two tracks, but this album is pure Rickles genius, if only for 25 minutes. Have a spin, and a few laughs. RIP Don Rickles. 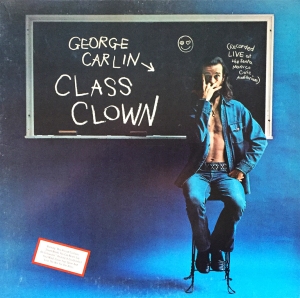 It seems as though everyone is afraid of clowns these days. Let’s not forget the classics. Have a Class Clown kind of a weekend, kids. Also, RIP George Carlin. 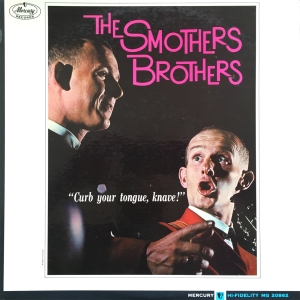 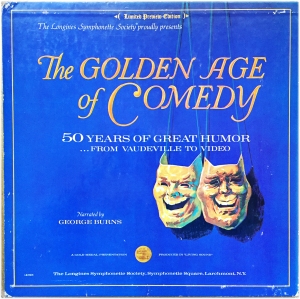 For those of you looking for a PG-rated laugh riot, consider this 5 LP marathon from the Longines Symphonette Society, The Golden Age of Comedy: 50 Years of Great Humor, From Vaudville to Video. Narrated by George Burns, this monument of comedy gold is a bear to get through, or at least exceptionally time consuming, but if you’re into the type of quality comedy that your grandparents ripped and riled to, The Golden Age of Comedy is your bag. 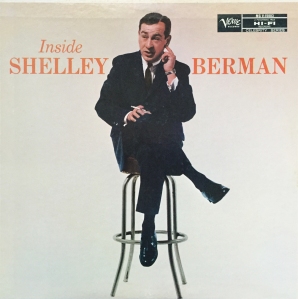 It’s so easily overlooked that Larry David’s father in Curb is the influential master comedian, Shelley Berman. Enjoy what is left of your weekend, knowing… 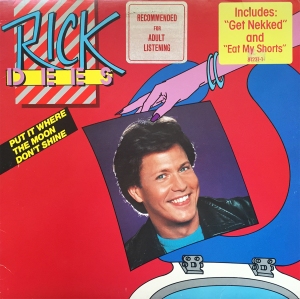 Novelties and Rick Dees tended to go together back in the collar-popping 80s like disco and ducks. While the majority of radio-listening ‘Merica knows ol’ Dees for The Weekly Top 40, those select, demented few among us know him for Disco Duck, and those lonely, pathetic among us know him for his early 80s comedy albums. Released in 1984, this (anything but) Orwellian approach to subjects like glue sniffing, shorts-eating, and candid phone conversations (with mainstays of the day, Julio Iglesias and Michael Jackson) make Put it Where the Moon Don’t Shine something of a, let’s say “interesting” listen. Clearly capitalizing on his radio popularity, this album was actually not, I repeat, NOT a one-off, as it was the follow-up to his 1983 debut, Hurt Me Baby Make Me Write Bad Checks! I don’t have that one, but the cover alone makes me consider hunting it down. Disco Duck on the other hand… 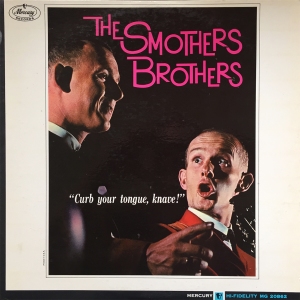 For some wholesome, gut-busting, brilliant hilarity, it really doesn’t get much better than the Smothers Brothers. If you don’t believe me, or are on the fence concerning legitimate blood-brother comedy duos, have a listen to Swiss Christmas. If I had prepared, I’d have had the mp3 ready… but I didn’t, so you’ll have to seek it out yourself. I’m sure I’m sorry. “Excitement!” 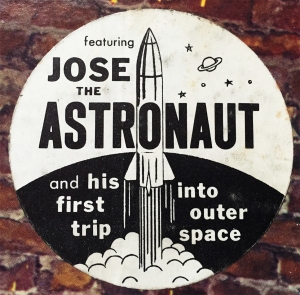 So, when the decision to purchase an album is based on the 50+ year old advertisement stuck to the cover of an unheard album, you know there is a problem. Jose Jimenez, and the 1960? promo sticker that surrounds Jose Jimenez at Hungry and I starring Bill Dana, is the culprit here, and I am the helpless victim. 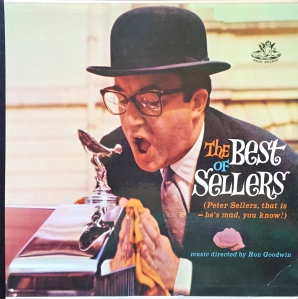 This album is a little more than a little misleading, as everyone clearly knows that the best of Peter Sellers is the 1964 masterpiece, Dr. Strangelove or: How I Learned to Stop Worrying and Love the Bomb. This 1960, 11-track record is decent for tickling your chuckle-button, and although Mr. Sellers is renound the world over for his acclaimed genius-like tendencies, it doesn’t get any better than Sellers’ (as United States President Merkin Muffley) call to the Soviet Premier Dmitri Kissoff. Check it out.
January 26, 2015 Misc 1979, comedy, Laff Records, record collecting, records, Richard Pryor, vinyl, wax Leave a comment 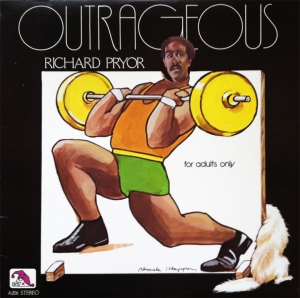 Mr. Pryor was certainly that, and we can all be thankful that such an accomplished comedian, and general observer of life, lived during a time of recorded material. How many Richard Pryors lived in the 19th century, and how would they compare by today’s standards? This man, his time… it was outrageously perfect. 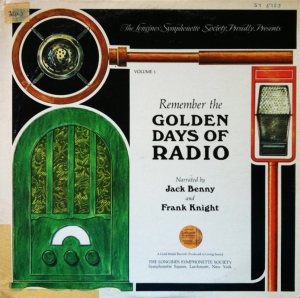 It’s time! No, not time to hate the Swiss*, but instead it’s time for that rich hour of both visual and audio stimulation with Remember the Golden Days of Radio (Volume 1). Jack Benny and Frank Knight present a glimpse into yesteryear’s prized idiot box (the original), with amazing snippets from comedians Fred Allen, Jack Pearl and Mel Blanc, as well as vintage commercial from the unforgettable and timeless products as Crisco, Lava and The Longines-Wittnauer Watch Company. It’s a great little comp with unexpected laughs and cheers around every groove. Check it out. 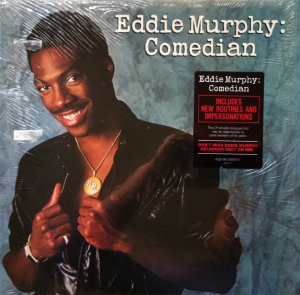 Where would members of the court, and high majesty be without the jester… the ushered in, and ushered out comedians to provoke wine-spilling punch lines of the grotesque nature? Likely, they’d be suffocating within a bubble of discomfort and self-loathing. Let’s take today, this 19th of December, and celebrate those who have made us laugh: Mothers, fathers, great aunts, gone, but not forgotten grandparents, and yes, Mr. Eddie Murphy. Richard Pryor he is not, but damn if this man is not a needed commodity, every groovy-once-in-a-while. 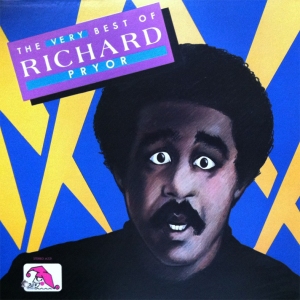 The Very Best of Richard Pryor is hardly what it claims. But as I’ve said, and will continue to say as long as I have life in my chest, it does not get any funnier than Richard Pryor.

Another Laff Records rush-to-get-it-out, recycled-without-a-hint-of-shame, X-Rated, listen-after-your-parents-have-long-gone-to-bed release, The Very Best of Richard Pryor embezzles from “Craps” After Hours (1971), Are You Serious??? (1976), Who Me? I’m Not Him (1977), Black Ben the Blacksmith (1978), Outrageous (1979), and what sounds like a Scotch tape merging of cutting room floor excerpts. This is all, of course, certainly not to say that The Very Best of Richard Pryor is without merit, and shouldn’t be owned by everyone who enjoys the idea of laughing until you cry. 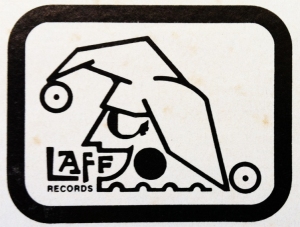 Recording only one, proper album for Laff Records, Richard Pryor saw many, recycled releases throughout the label’s tenure, up, and until to their ultimate demise sometime in the 1980s. Among the two I just acquired (Who Me? I’m Not Him and The Very Best of Richard Pryor), Laff Records released the following slue of cut and past jobbers showcasing the funniest man alive (RIP Richard Pryor): “Craps” After Hours, Rev. Du Rite, Are You Serious???, Insane, L.A. Jail, Holy Smoke, Who Me? I’m Not Him, Black Ben the Blacksmith (I just passed this one up on 8-track), The Wizard of Comedy, Outrageous, Supern!gger, Richard Pryor Live, and The Very Best of Richard Pryor. Milking the money cow that was Mr. Pryor proved to be profiting for the “adults only” label, and as far as I’m concerned, the more Richard Pryor, the merrier. 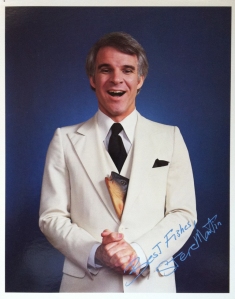 Milestone posts are always a let-me-down. Huge, flamboyant ambitions are conceived; yet, more times than not, reality yields less than satisfactory results. This, of course, takes nothing away from (rather adds to) the genius of Steve Martin (and his souvenir insert from the classic 1978 album, A Wild and Crazy Guy) and / or this gentleman’s comedic herring (or, whatever hell kind of fish this is). 600 posts, for each and every one of the Prudent Groove days (a day in which I’m awake and functional… which sometimes, as of late, happens to extend past the standard 24-hour mark… I make no apologies), which, by defaulted design, keeps me fresh and anxious by the ambitious, yet stressful necessity to “continue.” Rediscovery of one’s varied collection has proved much more pleasing than initially conceived, and I sincerely appreciate (and deeply question… WHY?!) the avid stoppers-by.

The Prudent Groove… not knowing what to say for the past 600 days. Humbly, I thank you.

As the kickoff to your working week comes to lethargic, sluggish conclusion, allow the angel whispers of Richard “I Hope I’m Funny” Pryor lull you into a comedic coma. Richard Pryor released well over 20 albums in his famed stand-up career, and each of them is, without hesitation, absolutely perfect. 1975’s …Is it Something I Said? is certainly no exception.

Standouts (and there are a ton) include, but are not limited to When Your 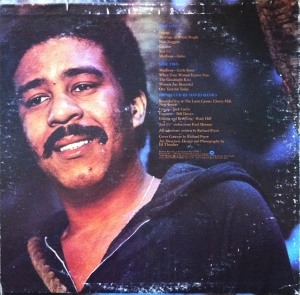 Woman Leaves You, Cocaine, Shortage of White People, Mudbone – Little Feets, and Our Text for Today. Between 1971 and 1975, Rich released three back-to-back-to-back works (the holy trinity of recorded stand-up) that stand unmatched, some 40+ years later. If you ask me, and you didn’t, every fan of the laugh needs to own 1971’s “Craps” – After Hours, 1974’s That Nigger’s Crazy (that is a wild one), and this, 1975’s ...Is it Something I said? Treat yourself to the finer things in life, and enjoy yourself (yore-sell) some Richard Pryor.