Man, gone are the days when “Organ” is a marketable category. Circa: 196x?, this “new world of sound” insert shines a stark spotlight into a bit more of the inconspicuous corners of the Decca Records catalog. With bold sections like “Piano” and “Instrumentalists,” it’s fairly evident that Decca wanted to showcase their vast and eclectic tastes, while still adhering to some of their main staples like “Country and Western” and “Folk.” Another day, another insert. Sadly, we’re beginning to run out…

From “Children’s Music” like Danny Kaye and Winnie the Pooh, to “Movie and Broadway” with Oklahoma and Song of Norway, you can bet that Decca Records really does offer “a new world of sound.” Perhaps popular vocalists like Rick Nelson or Brenda Lee is more your bag, or escape the continental US with a handful of great “Hawaiian Music” with Alfred Apaka or The Honolulu Symphony Orchestra. Whatever your flavor, Decca has you covered.

Torn Curtain, Hitchcock’s 1966 classic starring Paul Newman and Julie Andrews, has slowly become one of my favorite Hitchcock films, in no small part due to John Addison’s riveting soundtrack. Released by Decca the same year, this 12-track record clocks in at just under 30 mins, and serves as a perfect mini adventure for the ears as well as the imagination. If you haven’t watched it in while, I suggest taking some time during the holiday, and if you find a copy of the soundtrack on vinyl, I highly recommend picking it up. 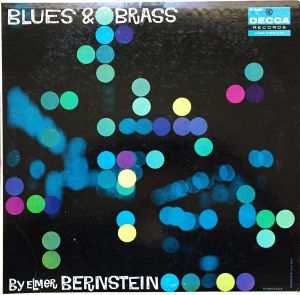 After the success of The Man with the Golden Arm (Academy Award nomination for Best Original Score), Mr. Bernstein ventured away from the silver screen and into the modest world of long play analog media storage. His first album is this 1956 release on Decca, Blues & Brass, which captures what the back sleeve describes as “city blues” throughout 12 dramatic and late-night-comforting tracks. If Mr. Bernstein’s film scoring career wasn’t as hugely successful as it was (he scored The Ten Commandments the same year as this album’s release, mind you), he could have easily notched out a Space Age Pop, lounge-infused, groove-based career as a successful studio musician. Find this album. You’ll thank me later.

Look. I know I just posted about this record, but I’m ACTUALLY spinning it and, let me say, it greatly surpasses the hype! Pianos, bongos, and, wait… where is my damn bagel?! Irving Fields Trio, you’ve outdone yourselves! (1959, kids.)

Gah! For some reason, these posts aren’t showing up on time. I blame WordPress (user error).

I’ll most certainly revisit this album for a much more in-depth analysis (and will likely use the same photo), but for now, I’m excited for my newest Space Age Pop acquisition: Irving Fields Trio’s 1959 classic, Bagels and Bongos. Haven’t spun it yet, but this cover is something dreams and offspring are made of. Bagels sold separately.

Little is known (by me) about theater organist Jesse Crawford. Big in the 1920s and 1930s, he received the “Decca treatment” on this 195? mono release of Over the Rainbow. Though I generally steer clear of organ-based wobblers, I couldn’t pass up the amazing cover art, depicting a sensationally colorful, and spectrum-spanning pipe organ. This copy is also signed by Mr. Crawford, so that helped matters. 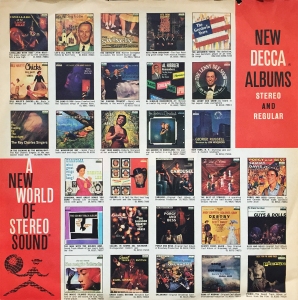 Regular = mono, apparently and according to Decca Records. Found inside Jesse Crawford’s 195? album, Over the Rainbow, this New World of Stereo Sound insert has something for even the seasoned listener, such as your esteemed self.

For the saddest (and most abhorrent) day in this nation’s modern day history, let’s drown our sorrows in, and (attempt to) ignore the incoming storm of racist ignorance with Bikinis and Bongos. Because, let’s face it… heavy, heavy drugs won’t be near enough to get us through the next 1461 days.

It’s been a while since we’ve seen a new Decca insert. This one, from a 1963 album by Irving Fields Trio features a rather minimal Jazz section, but boasts a hefty sum by both Bing Crosby (titled Bing’s Hollywood) and Al Jolson. The Mood Music section is where I’m going to spend my time cherry picking, but there is plenty for even the novice listener to explore.

Man, thank Decca Records for their lifelong, globally-conscious contribution to the safety of all of us, and let’s, universally, thank them for enlisting a giant, intergalactic ninja that unrelentingly keeps our planet safe from outside planet handlers. A New World of Sound equates to a New World of Ninja Protection. Thank you, Decca Records!

Back, wayyyyyyyyyy back in the day when records were housed in nothing more than paper sleeves (the high cost of colored board be damned!), companies, such as the 1929 founded Decca Records here, saw a blank paper sheath as an advertising opportunity to sell more of their product. Makes sense, right? I mean, why not utilize every square millimeter of space to keep the bellies full? No, it wasn’t the act of garnishing repeated consumers that struck me as aloof, but instead the terms in which Decca described their catalog.

Absent, and apparently a lavish afterthought, were the artist names for each of the 20 different recorded sound categories. Instead, the customer was given a series of genres (complete with color-coded label), with which to make their money-offering decision. Have a look at the wealth of universal genres offered by Decca Records, and tell me you aren’t breaking windows and stealing cars out of sheer excitement for Series 8500.

This is an antique sleeve in which a 78rpm record was housed. The manufacturer was Decca, and the two-song record is unknown. I’m tired and want nothing to do with just about everything right now, so this trivial nonsense can very well go walk a yippy dog.

Here is a portrait of A Portrait of Patsy Cline. With heartbroken sass, the golden-throated goddess pillages through some of the lesser-known recordings in her short but remarkable catalogue on this, a compilation album by Decca Records from 1964. Released just a year after her unfortunate death, A Portrait of Patsy Cline is just one of many compiled arrangements released in part to celebrate the incredible, and enduring weight of Virginia Patterson Hensley’s (aka Patsy Cline) extensive work.

There are most certainly only two kinds of music… lovin’, and hurtin’… and nobody loved to hurt as much as the somber, lonely hearted Patsy Cline. 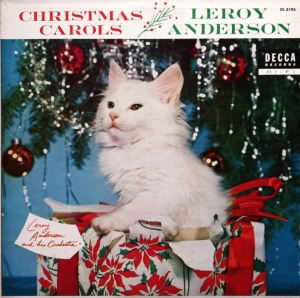 There is only one thing better than the glorious excitement of Christmas morn, and that is, of course, a mother lovin’ cat wrapped in a box!! Leroy Anderson is a man of impeccable taste; this fact is certainly not up for debate. As the back sleeve proudly proclaims, “altogether this is an unusual collection brilliantly interpreted.” I’m seldom one for shameless self-promotion (he laughs out loud), but this assessment of Leroy Anderson’s fine orchestral conducting is the perfect blend of classic Christmas sentiment and celebratory holiday cat-friendly cheer.

The Prudent Groove wishes everyone a wonderland of holiday hilarity filled with lighthearted liveliness and mistletoe smooching merriment. Merry Christmas, everyone! 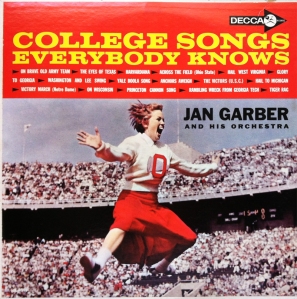 Have you ever felt nostalgic for barely recognizable frat-rants from 16 prestigious universities you never attended? Okay, then allow me to sweeten the deal. Let’s say these 16 cult chants were conducted by Jan Garber and his orchestra, pressed and released on Decca Records, and dates back to 1962! You feel that sharp pain in your lower back, don’t you? That’s the juicy jolt of nostalgia attacking your music muscles like an incurable virus. No need to worry, because the poison is also the cure (as you can plainly see from the over-stimulated Ohioan on the cover).

Whether you flunked out of Georgia Tech, slept through USC, or braved the brutal winters at the University of Wisconsin (or, if you’re like me, NONE of the above), then these sing-along classics are just the Hail Mary pass of desperation and competitive charge you never really knew you needed. Why not call up your old sorority brethren, break out the ol’ hi-fi, and bask in the lurid glow of memory’s rose-colored blaze? You can never go back to where you’ve never been, but thanks to Jan Garber and his Orchestra, faded memories of someone else’s past are just 33 1/3 revolutions per minute away.

In my attempt to corner the market of obscure, and rarely seen insert ads, my post-minded attention is shaken and gleefully captured by this two-tone insert by Coral Records.

Home to Buddy Holly and the Crickets, Coral Records was the not-so-ugly stepsister (subsidiary) of Decca Records. Formed in 1949, Coral Records saw fan-favorite releases by these, and many other big-name artists: Milton Berle, Lawrence Welk, Patsy Cline, Debbie Reynolds and the McGuire Sisters.

Unfortunately, Coral Records’ inspiring logo wasn’t enough to save the label’s merger with MCA Records in the 1960s. Save for the Lawrence Welk recordings, what was once known as a thriving and prolific label (they had Buddy Holly and the Crickets for crying out loud!) would devolve and become swallowed up by the Universal Music Group machine.

The phrase, “Buddy Holly Lives” may be true, but his label is now owned by a theme park. 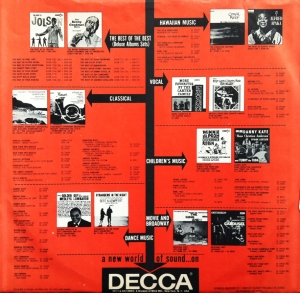 Decca Records spans an almost spectrum-like array of eclectic ear candy. Ranging from Children’s music (Winnie the Pooh), to Hawaiian music (Alfred Apaka), to Classical (Vivaldi), and last but certainly not least, to William Shatner (in whose 1968 album, The Transformed Man, I excavated this colorful insert).

It’s always interesting to see how creative these self-promoting record label inserts get in attempting to showcase their less-than-chart-topping-hit-records. I particularly dig this insert’s layout and how a simple arrow (repeated, obviously) can direct the eye to what the designer wants to showcase, and the order in which they want it presented. It’s almost a roadmap that effectively leads to the consumer’s ultimate destination… A New World of Sound… On Decca.