Not enough can be said about the soundtrack to the 1993 thriller Judgment Night. Pairing unlikely acts for an entire album’s worth of new material was a brilliant marketing technique from Music Supervisor Karyn Rachtman. You may know her work as Music Sup on a few of these other masterpieces: Desperado, Four Rooms, Reservoir Dogs, Mystery Men, Boogie Nights, and Pulp Fiction, to name a short few. 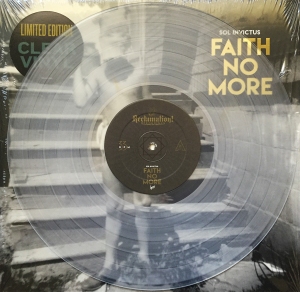 Although the “have yet to listen to” pile is dwindling, there still rests a bevy of killer albums waiting to join the fold, and Faith No More’s Sol Invictus sits atop them all. I pre-ordered this band site clear vinyl edition back in May, then it went on backorder. Presumably an issue with the pressing plant, or that’s what the email said. Whatever the reason for the delay, be it manufacturing or the lack of free time, Sol Invictus spins its virgin voyage tonight! 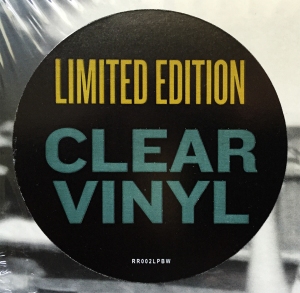 Secured atop the cellophane sheath to Faith No More’s Sol Invictus, their latest, is this color-printed marketing sticker promoting this release’s colored vinyl (or lack there of) goodness that lives within. In about 5 or so years this sticker will be dropped from social consciousness (if it hasn’t already), as do most, if not all throw away marketing stickers, so let’s take a moment today and pay a little attention to the subtle, short-lived details that surround a modern album’s release… or don’t. I’ll have no way of knowing what the hell you do. Happy hump day! 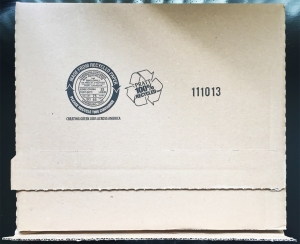 Let’s do this. For day #843, in my exhausted and lethargic state, and also because I’ve just about had it with humanity, here is a list of “in the mail” records that have yet to hit our doorstep; Some for obvious reasons (they haven’t been released yet), and others because they’re apparently being couriered by the Pony Express. Happy Saturday, kids:

Where the Buffalo Roam (The Original Movie Soundtrack)

Beware when purchasing records off Amazon, kids. There may well be a time when you read the description for a 2013 marble red vinyl reissue of Faith No More’s 1994 masterpiece, King for a Day Fool for a Lifetime, and you order and receive its black vinyl brother instead… then again, upon contacting Amazon describing the issue, they send out a replacement that’s… identical. Needless to say, they’re both going back. Buyer beware, kids 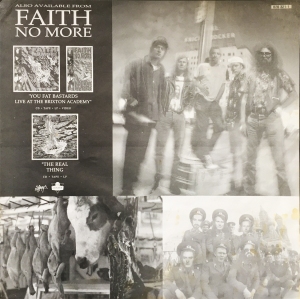 I’d known Faith No More to be an enigmatic and critical band for more than 20 years, but it wasn’t until last night that I finally realized their crushing significance in modern day pop music. I’d witnessed many an amazing show in my tenure, but last night’s performance at The Wiltern was by far one of the best I’ve ever experienced. Patton singing Bacharach, and (obviously) NAILING it, is one of a handful of scenes that I’ll be mulling over for quite some time. I went in knowing it would be a good show, and I walked out shivering for more. 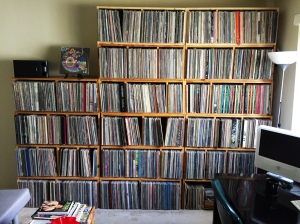 This is what I get for leaving the house this morning and forgetting to snap a photo for today’s post… no photo for today’s post. With the Faith No More show tonight, I likely won’t be back home again until the wee-wee hours of tomorrow’s AM, so I’m left to scrounge through the limiting photo library to find something worthy of a few, hurried sentences. I present to you, with wistful negligence, a photo of our collection circa: Wednesday, April 22nd. (Please ignore the antique iMac, but don’t overlook the book, A Wailing of A Town “An Oral History of Early San Pedro Punk and More” 1977 – 1985… essential reading material.)

Released in June of 1989, Faith No More’s third studio album, The Real Thing, is chiefly known for its funk metal classic, Epic, as well as being the first album from the band to feature newly crowned frontman, Michael Allan Patton. Although not as complete a Patton-led Faith No More album as their 1992 follow-up, The Real Thing remains one of the most successful funk metal albums ever released.

“You want it all but you can’t have it,” exclaims Mr. Patton. Fans would only have to wait three years for the opportunity to have what they wanted: 1992’s Angel Dust.

1993 was an interesting year. I was 14, and back then, New Jack Swing was alive and violently flowing from the radio waves like a raging river of hip hop and dance-pop fusion, but you know, with tight-rolled Z Cavaricci’s and LA Gear footwear.

Shifting away from spoon-fed radio, for me, was a slow burn.  We only had two radio stations that played anything other than Western or Country, and the closest record store was something like 40 miles away. A bit too far for me and my trusty BMX, as it turned out. 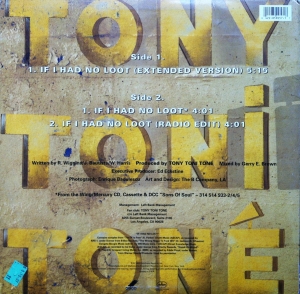 If I Had No Loot was a recent purchase, a $1 thrift store find actually, and serves as one of those “throwback” records that I’ll frequent when the thoughts of my younger years slowly begin to seep through the thin layer of 2013 reality. Other bands that fit this category include Animotion, Tone-Lōc, Paula Abdul, R.E.M., Prince, Jane’s Addiction, Faith No More and Pet Shop Boys (I was a confused kid).

For all its amazing shortcomings, If I Had No Loot still manages to stand its ground, and is as catchy and enjoyable as when I heard it for the first time screaming from Z-104 (104 FM) out of Madison, WI. People say music is timeless. I say, music is a time casket, emerging from yesteryear like a Pepe jean, Hypercolor shirt wearing zombie. 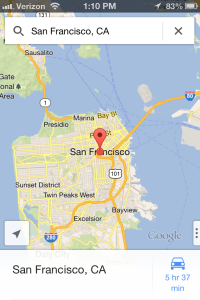 I’ll be up in SF for a few days, but still wanted to submit my daily post. While up here, I thought I’d comment on SF bands that I find interesting (idea by Jason Hardwick). So, here is a list of a few SF area bands that I dig, with a youtube vid link to accompany them. Enjoy!

Their version of Summertime Blues is considered, by some, to be the first “Heavy Metal” track ever recorded. Blue Cheer formed in 1967.

Riddled with legal battles throughout their tenure (mainly 1985’s obscenity trial over the artwork from their Frankenchrist release), the Dead Kennedys were among the first US based Hardcore bands to gain discernible popularity in England. They formed in 1978.

Starting in 1981 under the name, Faith No Man, Faith No More saw a revolving door of lead vocalists until landing Mr. Bungle’s Mike Patton in 1988. 1992’s Angel Dust was considered to be highly influential throughout the 90’s and early 2000’s. Their recent reunion notwithstanding, they parted ways in 1998.

Huey Lewis and the News

Gaining popularity at almost galactic proportions, HL&N were a personal favorite of mine throughout my childhood. Huey’s cameo in Back to the Future still makes me chuckle. Huey’s real name is Hugh Anthony Cregg.

The first from the SF area to gain mainstream success during the psychedelic rock boom, Jefferson Airplane would morph into Jefferson Starship, then regrettably, just Starship. They formed in 1965 and ended their initial run in 1972.

CCR was a band that I thoroughly enjoyed listening to when riding in my Dad’s truck as a youngin’. Thinking they were a Southern band until I got wise, CCR, since the early days of my youth, has never been far out of reach. That can’t be said for many bands I’ve come across. I think the majority of my childhood musical favorites were deemed “not worthy” during my first years as a teenager. I blame Lords of the Underground and Onyx. CCR began as Tom Fogerty & the Blue Velvets, then changed their name to The Golliwogs before settling on Creedence Clearwater Revival. CCR disbanded in 1972.

Oh, NOFX. There was a point in my life where I could simply not get enough NOFX. Those years have been put to sleep, but I still reminisce from time to time. Although they formed in Los Angeles in 1983, they currently create crass melodies up in the bay area, hence the inclusion on this list.

Active from only 1987-1989, and releasing only 1 studio album, Op Ivy went on to become underground cult Gods. Influencing such notable bands as Green Day, the majority of the Fat Wreck Chords cast, Sublime, and eventually turning into Rancid, the band of 4 energetic punk (ska-core to be specific) got their name from a series of American operated nuclear tests conducted on the Marshall Islands (in the northern Pacific Ocean) in 1952.

Another one of “those bands” that my father frequently played, the diggity Doobie Brothers are the subject of comedic utterance by Michael Douglas in the 1984 classic, Romancing the Stone. Don’t remember the line? Here it is. They also created some pretty bad-ass music. I’ve never met someone who’s admitting NOT liking the D. Bros. (They formed in San Jose, I know, but it’s close to SF. Give me a break.)